Roots and Branches: On Crackers and the Zombie Apocalypse

When you’ve operated a successful restaurant in Asbury Park, New Jersey patronized by the famous,  including Bruce Springsteen, and then decide to sell it, what’s your next business move?  Once Clark and Ana Mitchell sold the Twisted Tree Cafe in New Jersey,  their exit strategy was to move to Asheville, North Carolina with the idea of opening a restaurant.   After relocating, Clark began tinkering in his kitchen and came up with what seemed to be a foolproof recipe for crackers.  The experimentation bore fruit and looking for a way to sell their crackers, they set up in tailgate markets .  Soon the crackers were selling faster than Clark could make them and taking up every available space in their home, “We had them on every flat surface”, he recalls.  Clark recognized that they were on to something and the idea of opening a restaurant became less important.   Three years ago the Mitchells moved their cracker making and baking operation to a former post office in the nearly deserted downtown of Swannanoa , North Carolina, about two miles from the corporate offices and distribution center for Ingles Markets. There are currently 7 employees (3 of them part-time) that work to produce the crackers that can be found in grocery stores (like Western NC Ingles Markets),  cheese shops and gourmet  food shops across the United States.   Clark credits much of the success of Roots and Branches to his wife and partner Ana, “…she handles things in here (gesturing to the kitchen work space) with the employees so I can be on the phone or the computer selling and talking to businesses.” 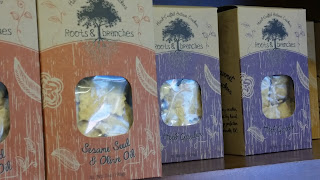 On the day I visited the simple facility in Swannanoa, apron clad workers quickly and efficiently rolled out and cut  dough, loaded trays into ovens  and packaged crackers as jazz music played in the background.  The air was sweet with the smell of the dough and the warm scent of just baked crackers.   Clark pointed out a rounder machine that shapes the dough into balls.  Each ball of dough produces three trays of crackers. Each tray of crackers takes about 20 minutes in the oven and each day they box approximately 400 brown boxes of Roots and Branches crackers.  During the holidays that number will increase to about 600 boxes each day.

The ingredients for Roots and Branches crackers are simple: olive oil, unbleached wheat flour, semolina ,and  salt. They currently produce five flavors, Olive Oil, Black Pepper, Sesame Seed and Olive Oil, Rosemary and Olive Oil, and Herb Garden.  Clark uses King Arthur flour, “…because it’s the best” and drives to Charlotte monthly to get bulk amounts of olive oil which is the most expensive ingredient.  Clark acknowledges that, “When you’re a cottage industry you solve problems on the fly…as you go..”.  One of their challenges right now is increasing their power supply in an older building to keep pace with the orders for crackers. 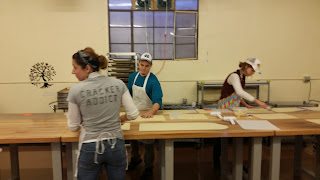 We talked a bit about the vibrant  entrepreneurial community in Western North Carolina that seems to grow so many successful small food businesses.  There is definitely a spirit of camaraderie among these food entrepreneurs that share resources, information and ideas as well as frustrations.  It can be a risky proposition to go into business for yourself, especially a food business, as Clark pointed out smiling somewhat ruefully,  “You have to love it in a weird way…I’ve met many that have a good idea but implode.”

As I prepared to leave,  Clark picked up one of Roots and Branches advertising post cards that he had illustrated with a zombie cartoon, “Because you definitely need Roots and Branches Crackers in the Zombie Apocalypse” he said with a  grin… sounds like a good strategy to me.